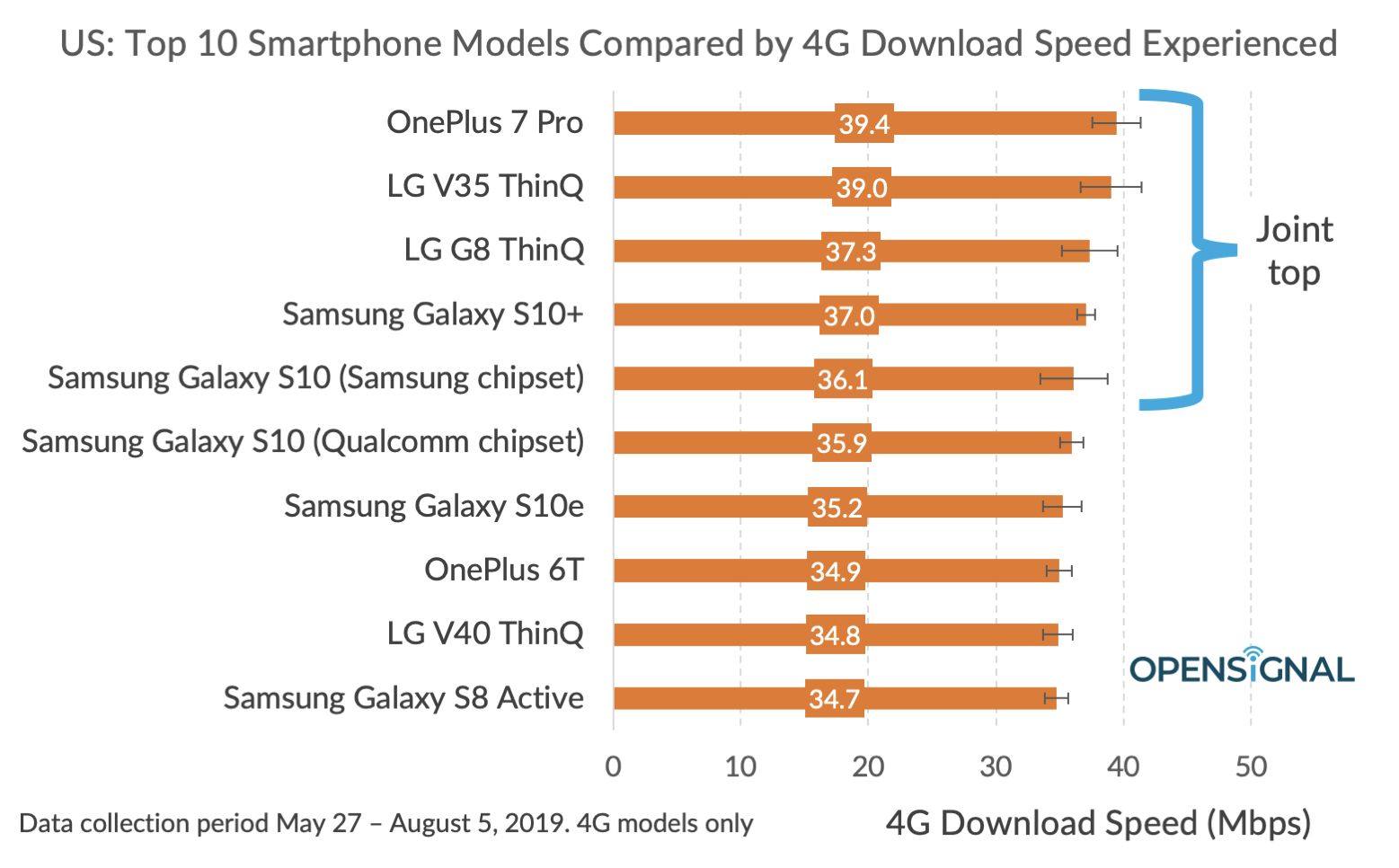 Users of smartphone models from OnePlus, LG and Samsung experienced the fastest download speeds in the U.S.: OnePlus 7 Pro, LG V35, LG G8, Samsung S10 and S10+ tied for first. All bar one smartphone models in the top 10 used chipsets and modems from Qualcomm — the exception being a lone Samsung S10 model that used Samsung’s in-house Exynos chipset that is more commonly found outside the U.S.

People are upgrading their smartphone model less frequently than they used to. The smartphone replacement cycle which tracks this trend is lengthening and is now estimated by Strategy Analytics to be around three years. This means that with 2019’s new iPhone models arriving, the existing iPhone users most ready to upgrade will own models bought in 2016, such as the iPhone 7, 7 Plus, or perhaps one of the previous years’ iPhone models that remained on sale in 2016, for example the iPhone 6s. 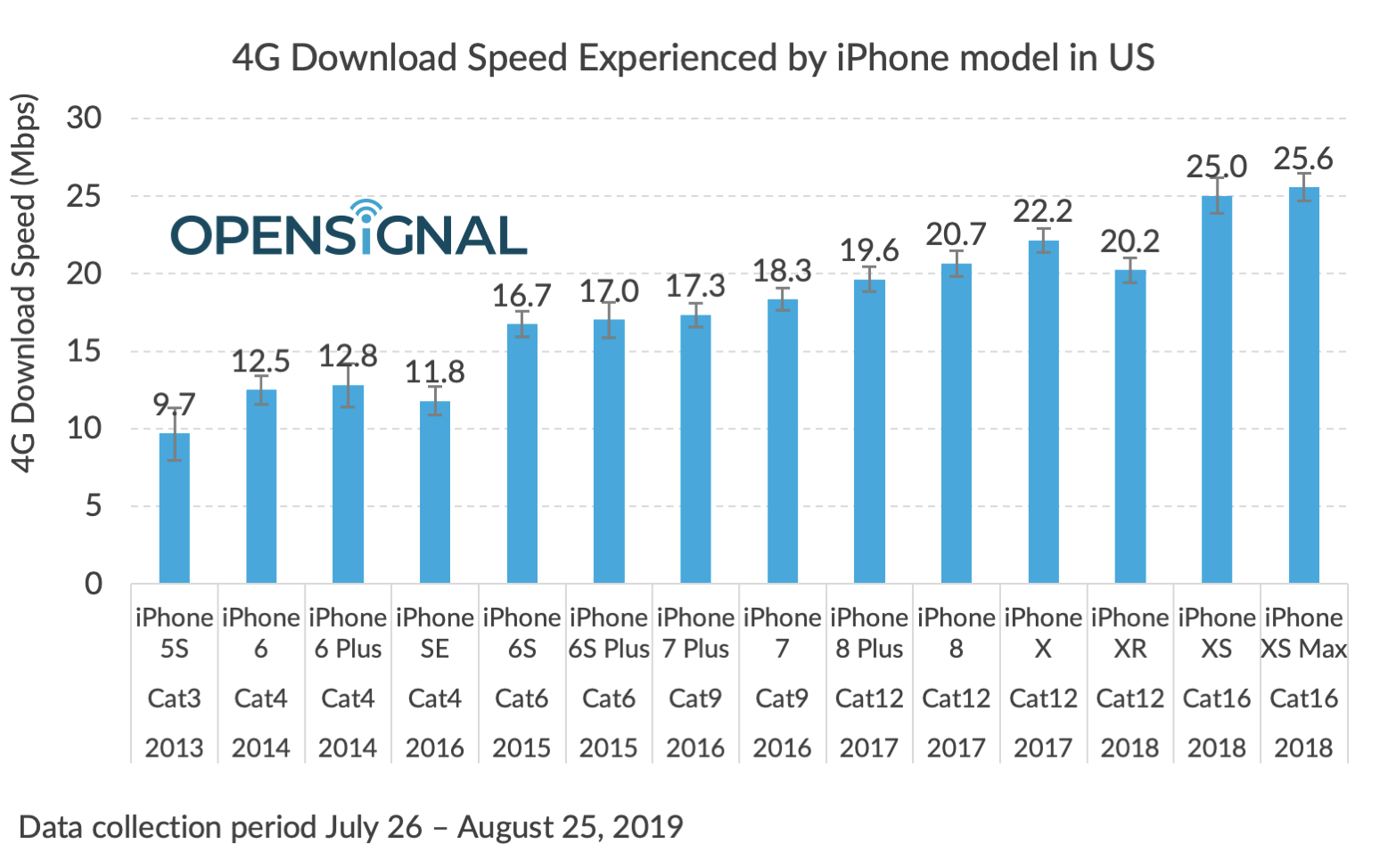 iPhone users with these older models experienced much slower download speeds than those with the latest iPhone Xs and Xs Max, with 4G Download Speeds between 16.7 Mbps and 18.3 Mbps for the three-year-old models, compared with 25 or 25.6 Mbps for 2018’s Xs range. Assuming Apple continues to improve the iPhone — as near a certain prediction as is anything in the mobile and technology markets (!) — then users with 2019’s iPhone models will be able to experience even faster speeds, widening the experience gap even further with older models.

Not everyone owns, or can afford to own, a premium smartphone, with prices of the latest top models now well over $1000. For this reason, smartphone makers create cheaper models with less capable modems and chipsets. Additionally, older smartphone models continue to be used by consumers, often these are less capable simply because the technology was not advanced at the time of their release. This leads to a wide variety of smartphone models in use.

When Opensignal examined each different smartphone tier in the U.S., we found the position and relative strength of handset makers varied in each tier:

Across high-tier and mid-tier smartphone models, our users with Qualcomm-powered smartphones experienced the fastest download speeds in the U.S. with 4G Download Speeds of 33.7 Mbps among high-tier users compared nearest rival Samsung with 28.7 Mbps. There’s a similar difference in the mid-tier between Qualcomm users’ experience of 27.4 Mbps and Samsung chipset-powered users of 22.3 Mbps. It’s important to note that the vast majority of Samsung smartphone models sold in the U.S. use Qualcomm chipsets. Those Samsung models powered by Samsung’s in-house chipset are almost entirely sold internationally. In fact, almost all U.S. smartphone models use Qualcomm chipsets, but Opensignal still sees users with Samsung, Apple, MediaTek and even Huawei-owned HiSilicon chipsets in use in the U.S. 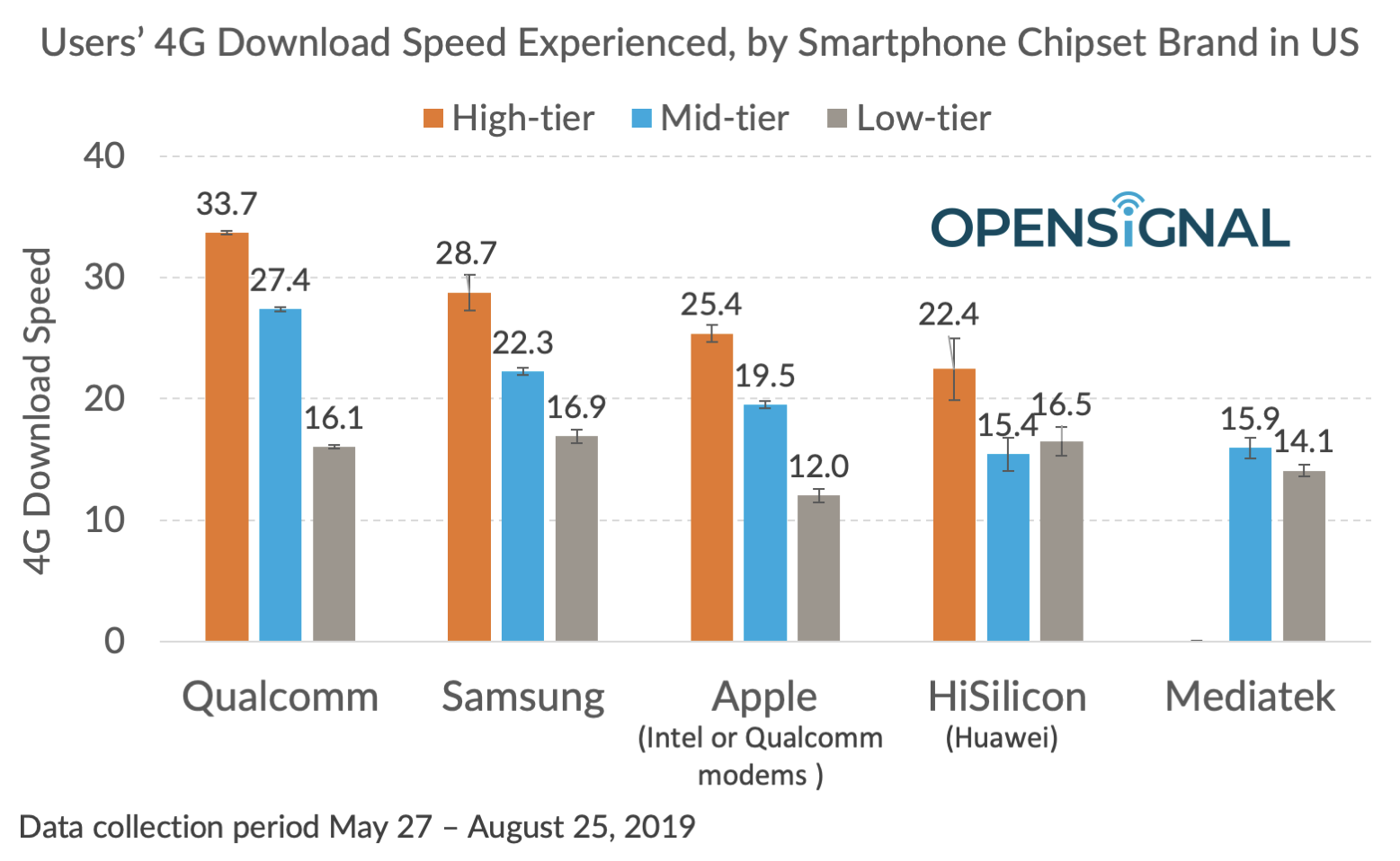 iPhone users do better on upload speeds than download, relative to Android users

As well as downloading media and streaming video, U.S. smartphone users care about sharing photos, videos, messages and emails which rely on the quality of the upload experience as well as download. Across different smartphone tiers, there was considerably less difference in the Upload Experience, and for some handset brands it was negligible. 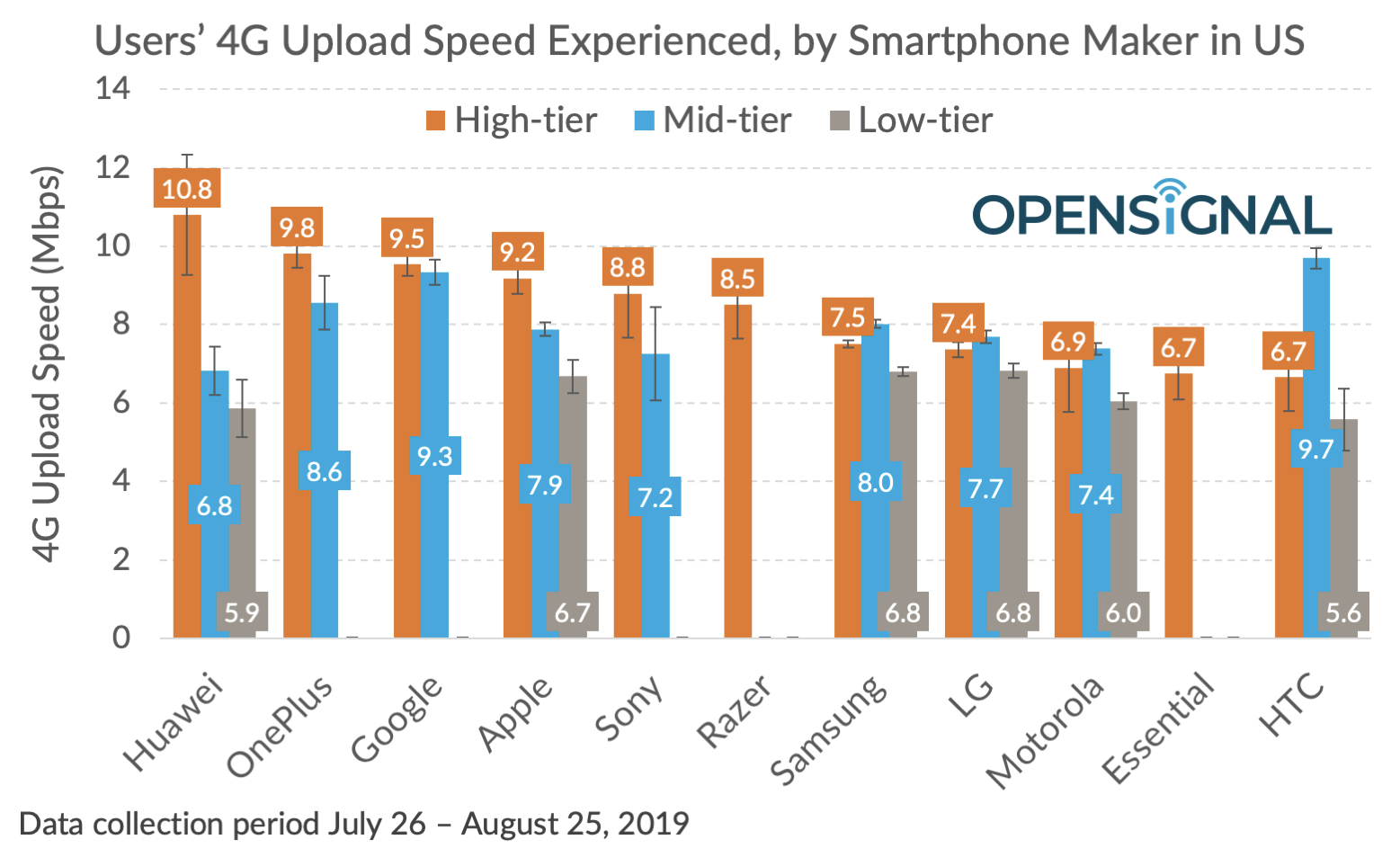 Just two Apple iPhone models made the top 50 on 4G Download Speed, with users of 2018’s iPhone Xs and Xs Max creeping in ranked at 47 and 43 respectively. With litigation over modem supply now behind them, Apple will hope to improve their users’ download mobile network experience with future iPhone models.

Apple is not the only well-known brand to have a limited presence. Users with Motorola smartphones represented just 6% of the top 50 models, and former smartphone market leader, HTC, had just one model in the list. Few Chinese smartphone brands had a presence in the U.S. top 50, despite their global success in recent years. The list included only OnePlus and Motorola users (although Motorola is now owned by China’s Lenovo, it originated as an American company).

No low-tier smartphone users were included in the top 50, while 48% of users owned models with high-tier capabilities and 52% had mid-tier, which mostly represented premium smartphones released in previous years with capabilities at the very top of the mid-tier category. 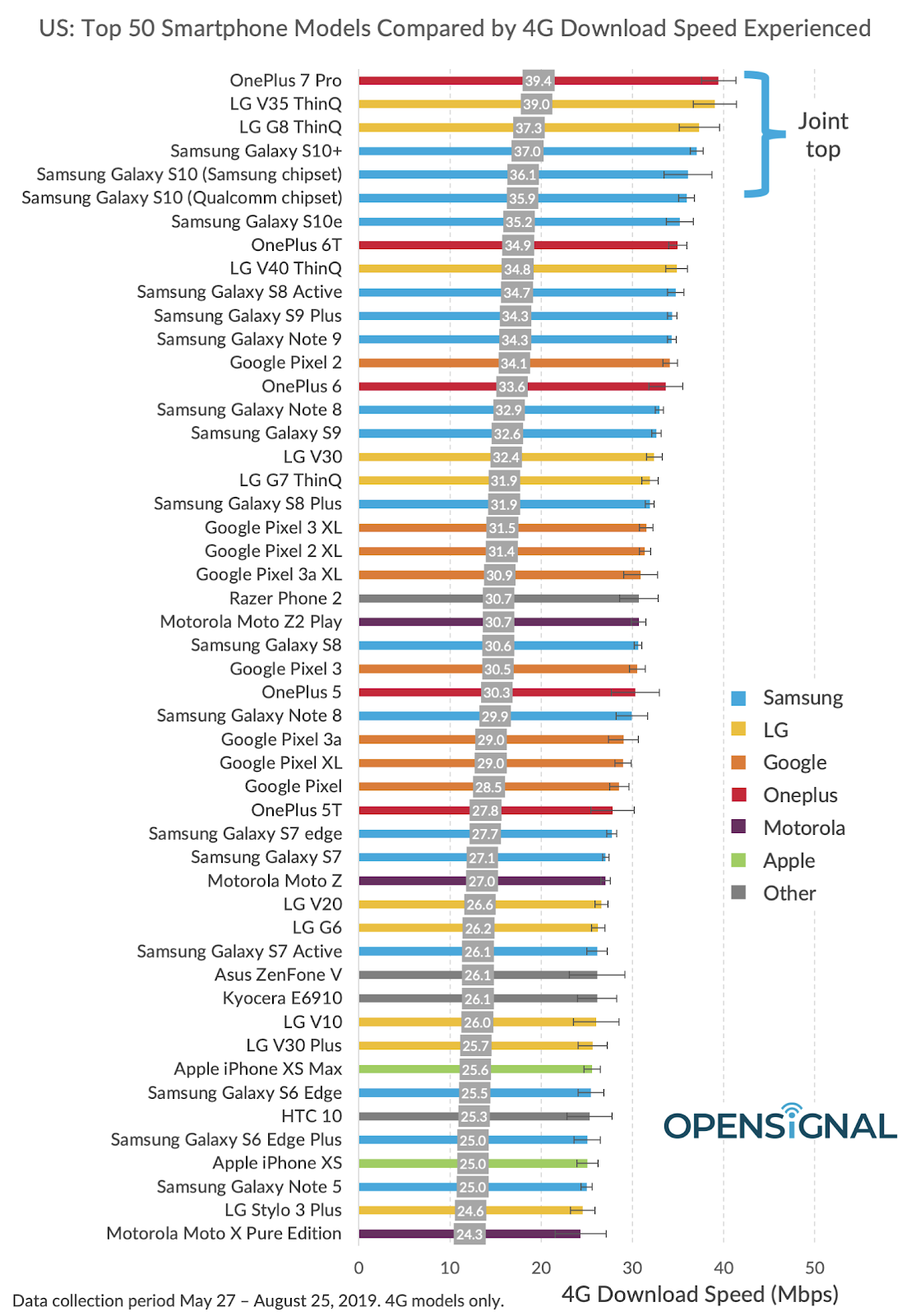